Create a camping small world for creative play. This idea has been inspired by the book Old Tracks New Tricks which we were gifted for review but all opinions and ideas are my own. I have a small confession to make: my kids have never been camping, poor things! We’ve owned a tent and some camping equipment for quite a while but we’re yet to take our first family adventure. Which we will, one day.

In the meantime I’ve created a camping small world for the train tracks to play in, because tracks are more than just things which exist for trains to go. This is something we learned from the book Old Tracks New Tricks by Jessica Peterson, the creative force behind Play Trains blog. It’s a book which explores some of the many other possible uses for tracks in an action-packed and humorous story kids will love. 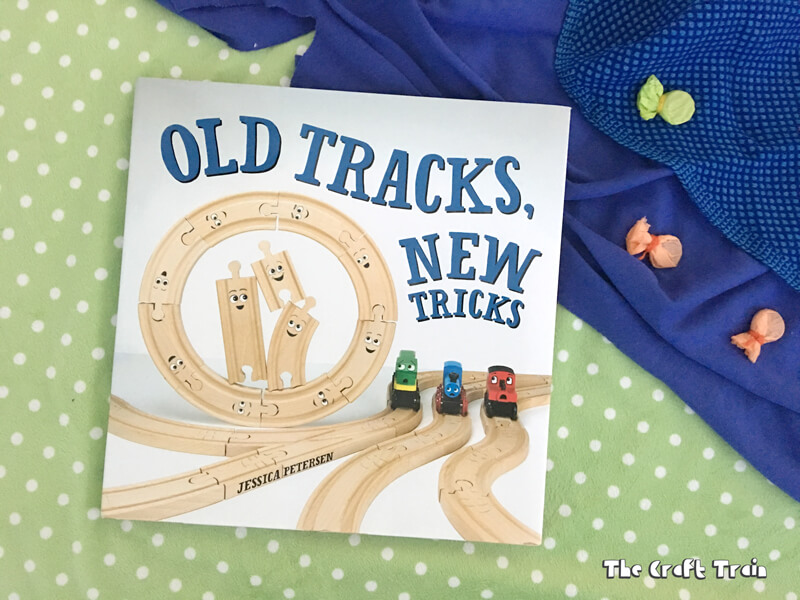 After reading about how tracks can dress up as robots, make towers, play hide and seek and become catapults (among many other things) our own tracks wanted to come out and play again. Up they came from the dusty back shelf in the garage and the girls have been busy creating and playing with them for a couple of weeks. Prior to reviewing this book I was secretly plotting to pass the train set on to a family with younger children who would give it the love and attention it deserves. Now we might keep it for a little bit longer.

How to create a camping small world

It’s very easy to create a camping small world. If you don’t have the exact items I have used simply substitute them for whatever else you have on hand.

I was inspired by the beautiful small worlds Ann creates on her blog Little Worlds Big Adventures when making this one. Remember that you can add or change any details that you like – your camping small world need not look exactly like ours.

Lay a large piece of green fabric on the ground to create the base for your small world.

Create a tent frame using long train tracks (ours even have a curve in them). They will need to be taped together using masking tape for sturdiness. Cover with a scrap of fabric and you have a tent. Wrap a pebble in tissue paper and cello wrap for the fire. Place it where you want the fire to be and surround it with pebbles. 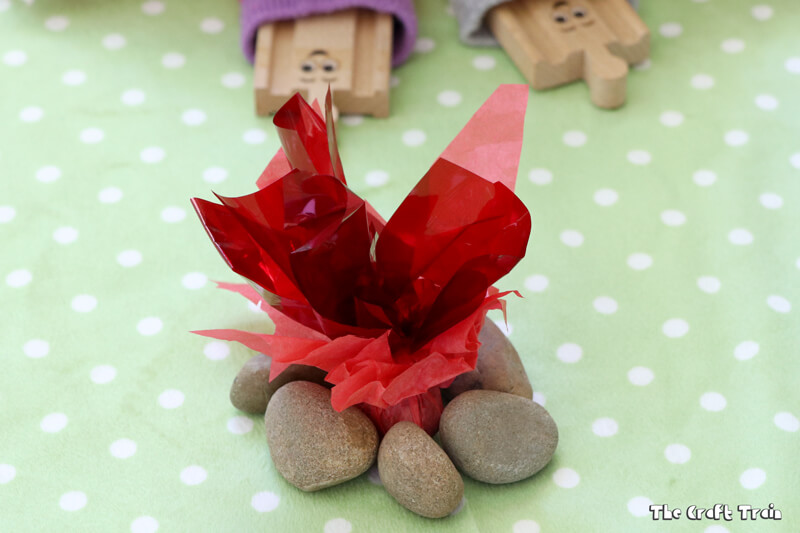 Create a pair wooden benches to surround the campfire by taping two curved tracks together. The marshmallows on sticks are simply beads poked onto the tips of toothpicks. Of course, the tracks will want to go fishing! Place the blue fabric scraps down to look like water with a few rocks. Create fishing lines by tying a pice of string to the tip of a bamboo skewer cut in half with the pointy tip removed. A pair of garden secateurs does a good job of cutting the skewer in half. Tie a metal paper pin to the other end of the string.

Create fish by wrapping a magnet in tissue paper and tying some string around the bunched up end. Now the tracks can catch some fresh fish for dinner! Once you set up a small world your kids will add to it as they play. It gives them a starting point and becomes a springboard for their own creative ideas.

Have you ever made a small world?

• Make a Dinosaur small world in a suitcase
• Create a mermaid city in the sand
• Kids will love this fairy garden small world with succulents
• How about a messy play dinosaurs in mud world?

Or visit our Small Worlds board on Pinterest for even more ideas.