Create a Noah’s ark for imaginary play with this easy cardboard box craft. Preschoolers will love saving their own stuffed animals from the flood!

Our “ark” has a gang plank to board the ship, portholes so the smaller animals can peek out and a sail to catch the wind. 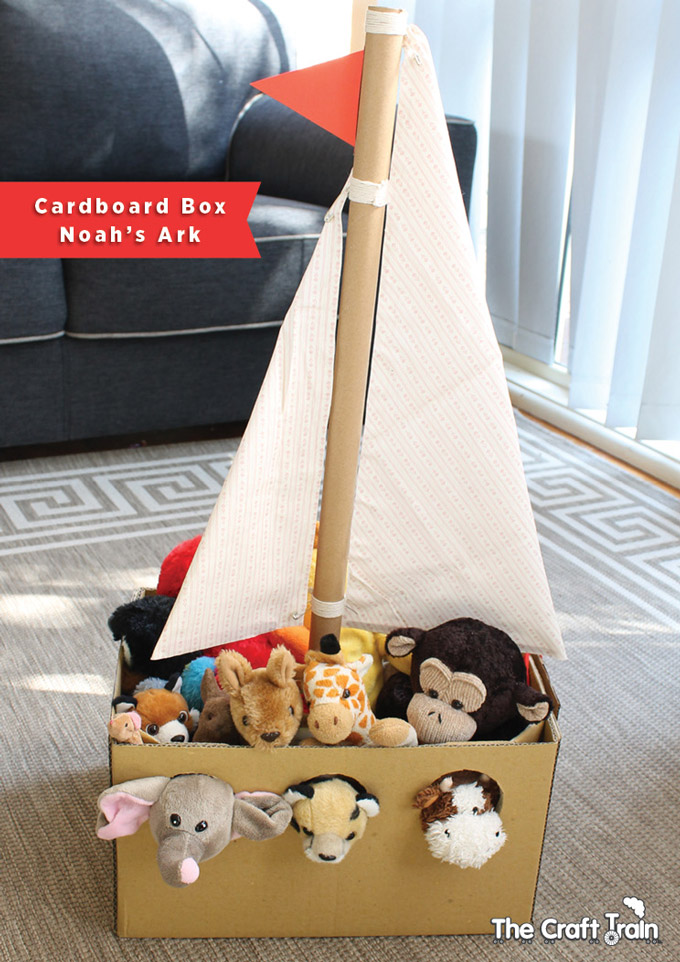 Let me start off by saying that this cardboard box Noah’s Ark is probably not an accurate depiction of the Bible story that we all know.

The Noah’s Ark from the Bible probably did not have a sail. All of the illustrations I’ve seen picture a giant floating vessel with a roof and lots of windows but no sail. Plus, we all know that there were definitely two of each animal (not an option from the selection in our toy box). However, this is pretend – and in pretend play there are no rules.

So in the spirit of Noah’s Ark, we have created a cardboard box sail boat and filled it with animals, all ready to be saved from the great flood.

Originally when I picked this box up from the supermarket I had grand plans for creating a puppet theatre, but it was not to be. Miss K filled it with toys and began pushing them about in their ‘boat’, so a boat it became. I found a few extra necessary bits and pieces from our recycling box and craft basket plus a piece of scrap fabric for the sail and that is pretty much all we needed. How to make a Cardboard Box Noahs Ark Trace around something round (about the size of a drinking glass) to create the portal windows, and cut them out with your knife. Next hold your scrap of fabric next to your long cardboard tube and work our how big you need your sail to be. Ours is a triangle that covers the length from the top of the tube down to to top edge of the box, and is about as wide in diameter as half the length of the box.

Make one large sail and one smaller one, using the smaller craft stick for the bottom edge of the littler one. To fix the sail to the mast, I threaded safety pins on to string through the bottom loops and wound the string around the mast, tied in knots to hold it in place. I put these pins wherever the sail needed to join to the mast. The sails then were pinned to the mast. The mast was held in place with tape and then braced with the yoghurt container with a mast-sized hole in the bottom as shown. Our ark needed a door for all the animals to get in, so I cut a fold-down flap on the back, attached a slightly longer piece of scrap cardboard to make a ramp, and added a shoelace threaded through the ramp to tie it in place. The finishing touch was a small triangular flag made from construction paper held in place with more double sided tape. Miss K enjoyed loading the animals onto the ark. Not to forget Noah! 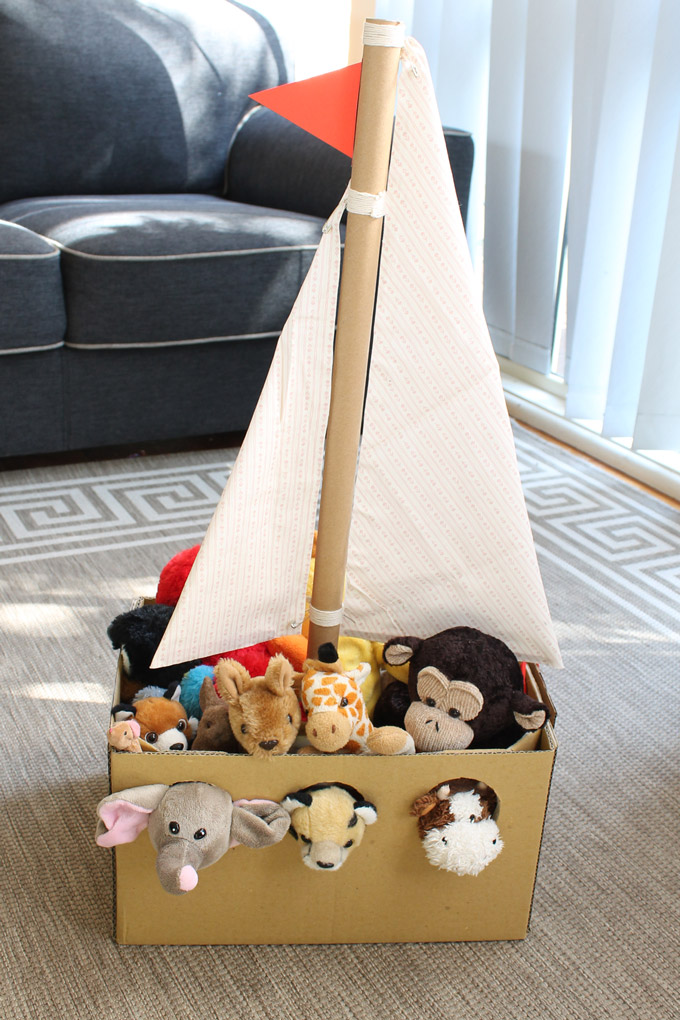 As simple as that you have your very own pretend play “Noah’s Ark”, or cardboard box sailboat, or whatever you want it to be.