I’m pretty excited for my girls because there is a new DC Super Hero series out starring all girl super heros. My six year old has been a big fan of Wonder Woman for the past two years now, so much so that one of her favourite toys is a Wonder Woman action figure from the 1980’s, which belonged to her dad when he was a boy. She also has a real Wonder Woman costume, the kind with a gold rope and boot covers, that she saved up to buy with her own money – it took about six months worth of pocket money savings to get it which is a long time for a six year old!

Miss K would be happy watching any super hero show, but an all-girl line up makes it even more impressive in her eyes, so I knew straight away when I heard about DC Super Hero Girls that it would be a hit at our place.

Here is a little preview for you…

DC Super Hero Girls is filled with action-packed girl power! Brought to you by DC Entertainment, this animated series features a dynamic group of Super Heroes on their journey of discovering the power of their unique abilities and friendships.

You can watch DC Super Hero Girls on their own you tube channel. The good thing about the you tube channel is that it’s free to subscribe and it enables kids to watch their favourite characters at any time on any device. I do limit screen time for my kids but sometimes when you’re stuck in a waiting room or on a long car trip this feature comes in pretty handy.

We love how cool the characters are, from strong and fearless to edgy and fun, there is a character for everyone. If you have always wondered which Super Hero character is most like you then wonder no longer, you will find a quiz at the end of this post that will help you to determine exactly that (I’m Harley Quinn, if you can imagine that!)

To celebrate this new, fun series we decided to create some peg dolls to look like our favourite heroes. It was not an easy decision to select our top three because we like them all, but in the end I picked Wonder Woman (of course), Posion Ivy because the world needs more red-headed heroes and Batgirl because she is so cool. This is how we made them: First you need to paint the clothes. To help me get the colours and style right (well, as right as I was capable of anyway) I printed out a picture from the official website that included a good full-length picture of all of the heroes in action and used it as a guide.

Tip: When painting peg dolls it is a good idea to use a sheet of non-stick baking paper underneath. The acrylic paints dried extremely quickly for me in the summer heat, but the non-stick baking paper helps to stop any wet paint from sticking to the surface. This is not completely fool-proof, I still wouldn’t put WET paint straight down on this, but for any that is almost-dry it helps to stop the paper ripping and sticking to it. This is how my dolls looked after the outline of the clothes was painted on. Once that has dried add details with the lighter coloured paint, like the gold belts on batgirl and Wonder Woman, and the white stars on Wonder Woman’s tights.

For the darker coloured details, such as the green vines growing up Poison Ivy’s legs, I used gel pens. I also used gel pens for the faces, which are small and difficult to draw in detail so I just kept them as simplified black happy faces. To create the hair I used a bunch of embroidery floss tied in the middle. I stuck this on with craft glue and once the glue had dried I gave each doll a hair cut. Batgirl’s cloak was the only part that required a needle and thread. To make it I cut two pieces of felt, one into a pair of batwings and a second piece with two little bat ears and slits at the base to give it shape once sewed together. I sewed the batwings to the hood, and glued it on with a small dab of craft glue once the hair had been cut. 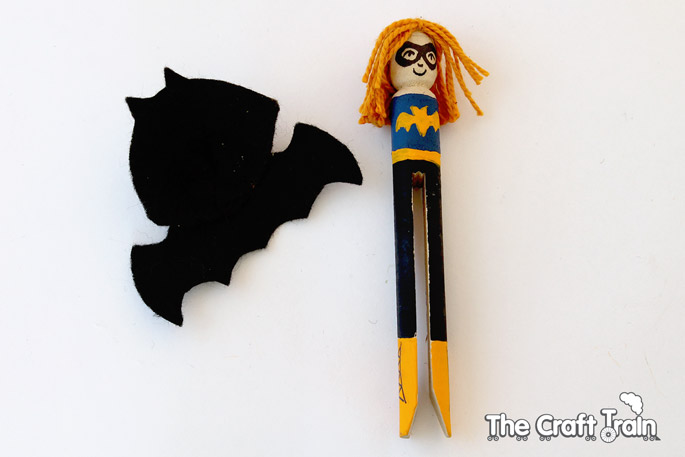 Poison Ivy needed some green felt made into a simple dress and a twirl of green wool in her hair to give it that vine-wrapped look. Somehow our peg doll version of Poison Ivy has ended up looking more like a forest fairy than a Super Hero, but we love her anyway. 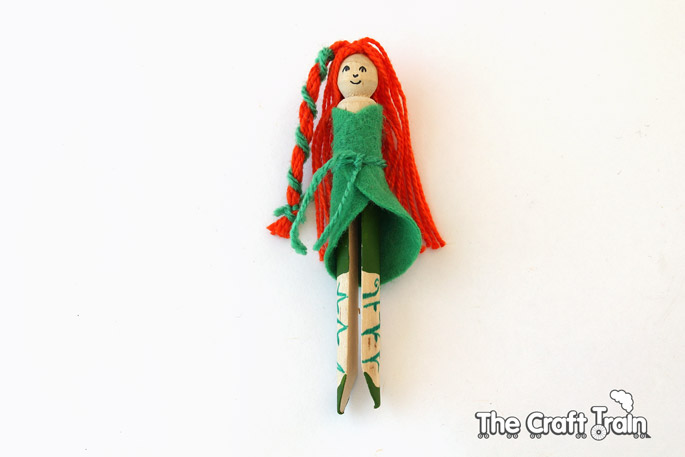 And here are the finished peg dolls ready for play! The girls tell me that they need some arms, but traditionally peg dolls don’t have arms so I left them as is. I think they’re cute! Do you have a Super Hero fan at home? Try this quiz to see which hero is most like her (or you!)

For even more fun, there is an extended online experience on the website where kids can play games, download free printable activities, and more.

You can find lots more fun DIY toys on our Craft and Play board on Pinterest, are you following us?