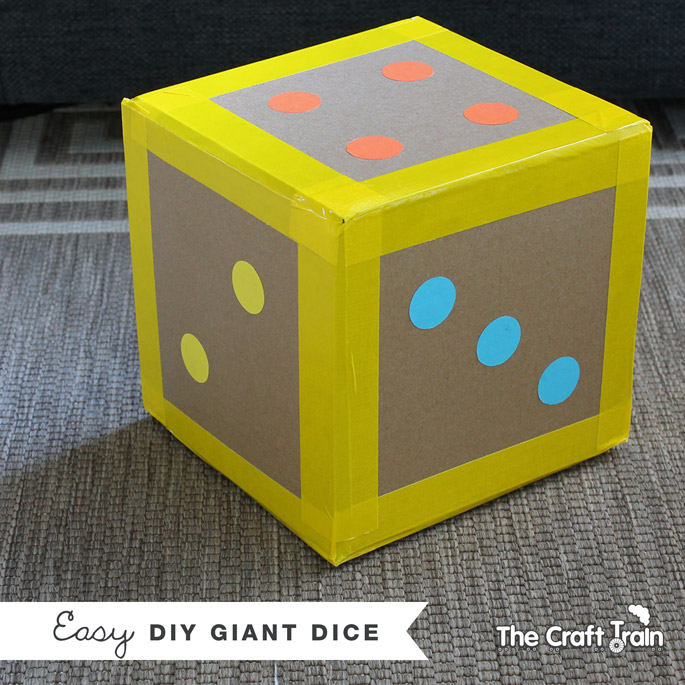 Quite a while ago my girls and I attended a community event in the park – Carols by Candle Light, run by one of our local churches. It was a great night of Christmas carols held outdoors under a summer sky and we all had a blast. At the event they had a stage with a contemporary rock band playing all our favourites while the girls danced with glow sticks and fake candles, plus there were food stalls and extra activities set up for the kids – including a GIANT game of snakes and ladders along with a giant dice. Ever since we played that giant game I’ve wanted to make my own giant dice just because they’re awesome. It’s been a while (two years in fact) but I’ve finally gotten around to it.

The original dice was a beauty – a square-ish cardboard box painted thickly in bright colours with hand-painted numbers on each panel. I wish I could find a picture of it. The one I’ve made is about half the size and constructed a bit differently, but it’s still very simple to make and you can be done and dusted in under 30 minutes.

Cut six square panels from your scrap card. To get them all the same size, first cut out one and use it as a template to trace five more. To get the original square you can use our printable template, or measure and cut one to size to your own preference (you could make it way bigger than ours). It’s important that each corner is exactly square so that it fits together well.

Lay your pieces out in a basic cube pattern, like below, and then tape securely on the back with duct tape. Fold into a cube shape, taping the inside of the box for extra sturdiness (it’s going to need to withstand a few bumps).

To stick the final panel in place I placed tape on each of the three adjoining sides an pressed the panel down – slightly fiddly but easy enough. When you’re finished this step you should be left with a cardboard cube, and all you need to do now is reinforce the sides with more duct tape on the outside and add the coloured dots. Use your hole punch to cut the numbers from one through to six in different colours and glue on with a glue stick. You might think that a dice created from cardboard wouldn’t be very durable, but’s it’s actually quite sturdy and strong. When used in the way it’s supposed to it should last a while – at least until the kids start peeling off the dots and poking scissors into the side (which happened the first time I made one BEFORE I got the chance to photograph it for the blog, cheeky kids!). 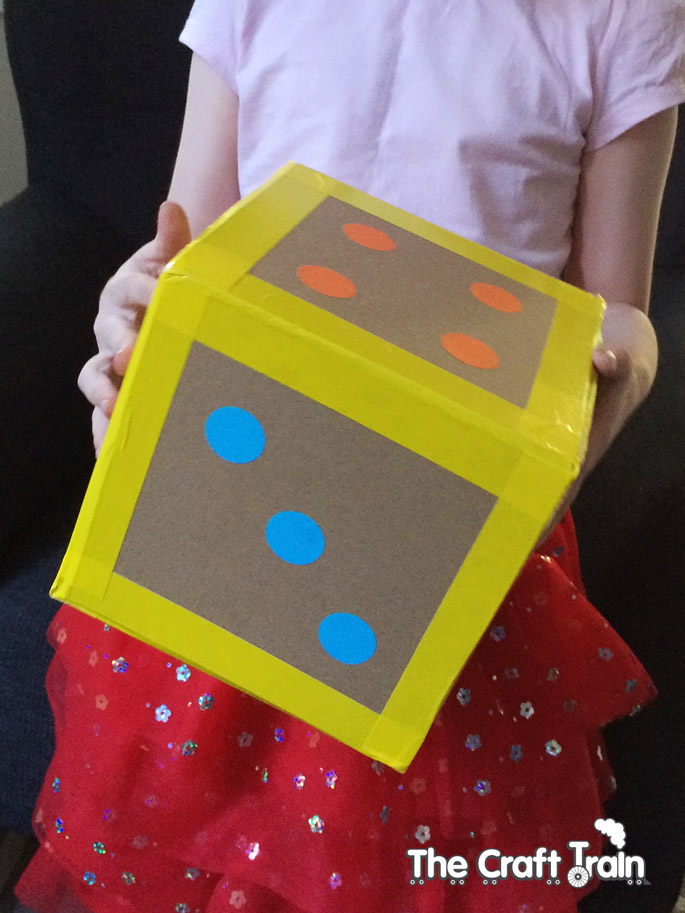 Now your giant dice is ready for some giant games. We’ll have some to post soon here on the blog so if you need some inspiration keep an eye out, or you could let your imagination run wild and design your own. There is also a list of fun and educational dice games to go along with our lucky dice shaker craft that you might like to try, or you could use your dice to solve arguments like we do (e.g. the person who rolls the highest number gets first turn on the computer – it’s way better than flipping a coin because they can’t fight over who gets to be heads and who’s stuck with tails, lol).

Visit our cardboard creations board on Pinterest for some more amazing inspiration. I love crafting with recycled cardboard, it’s such a great medium and has the added bonus of being free!