It’s amazing how a humble egg carton combined with a few bottle caps and paper rolls can become a DIY toy for imaginative play. Best of all, this egg carton fire truck is eco-friendly, being made from biodegradable and recycled materials.

At the end of this article are some useful links for how you can help support the current bushfire crisis happening in Australia.

This craft was originally created in 2013 and has been updated and reshared for today’s audience. 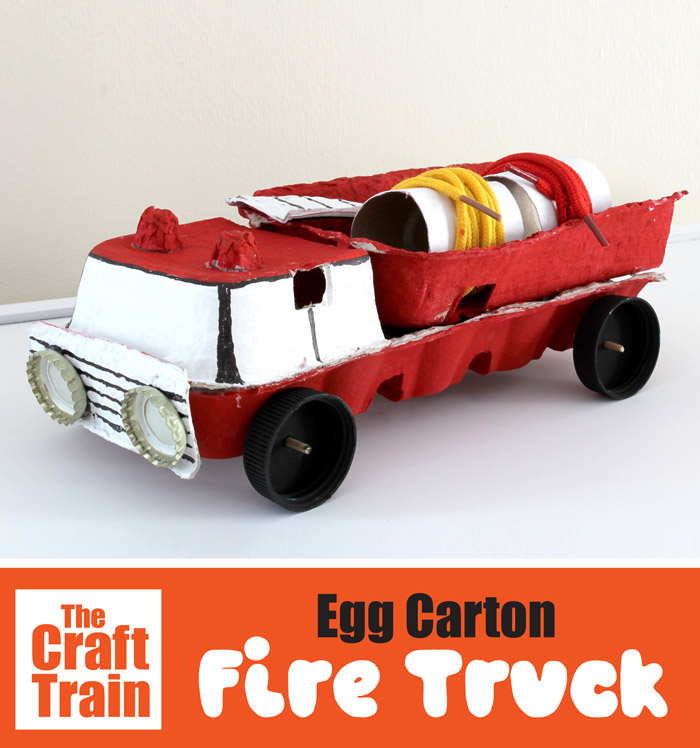 It’s been so hard to watch the destruction and chaos caused by Australia’s bushfires this Summer. Sadly, the fires are still burning and the season is only half over.

This kind of disaster understandably generates widespread fear and anxiety in people and also in our kids. It leaves us feeling helpless because aside from donating to the cause, there’s nothing we can do to change the situation or to stop the fires from happening.

So far this time around we’ve been fortunate enough to only get a lot of smoke but no fires in our immediate area, although some massive fires have been burning in neighbouring regions which can always be nerve-wracking. Even the smell of bushfire smoke strikes a raw nerve after a family experience a few years ago.

This egg carton fire truck is something I created with my girls last time bushfires affected our community, which was back in 2013.

Fire had destroyed over 50 homes in the street I grew up in, where my parents still lived.

At the time the fire struck my Mum and Dad were at home and managed to save their property by putting out spot fires with buckets of water and the garden hose. They were some of the lucky ones that day.

My girls (then pre-school aged) had seen the burned down wreckages of homes on the street their Gran and Poppy lived in on TV and in person. They’d walked past melted garbage bins and letterboxes, seen the blackened shells of cars still parked in driveways and smelled the overwhelming stench of ash and ruins.

They’d also packed their own bags full of favourite toys in case we needed to evacuate ourselves (which we did later that week). They’d woken up daily to the smell of smoke, the sound of helicopters hauling water and the wail of sirens flying up the highway.

They didn’t complain, but it was frightening for us and also would have been for them. This egg carton fire truck is something that came from not being able to get bushfires off our minds. Somehow, in a small way, including fire trucks and the putting out of fires in imaginary play helped.

Of course, you don’t need a bushfire disaster to make a fire truck craft – you can make one any time!

How to make an egg carton fire truck craft

Cut the egg carton in half lengthways so it’s in two pieces, then cut the flat piece in two at about a third of the way along.

Cut the pointy bits off the part with the egg cups and reserve 2 of these for the lights.

Cut the long flap off the side and reserve for the ladder and bumper bar. Paint most of the egg carton red as shown in this picture, but paint the side on the smaller flat part white for a windscreen.

Paint the long flap parts white for the ladder and bumper and the two toilet roll pieces white. Once dry, draw in detail with a marker. To make the wheels, pierce a hole in the plastic lids with a metal skewer heated over a gas flame (grown ups only). Use a metal skewer to make a hole in the egg carton where the wheels will need to go.
Once the hole is made thread the bamboo skewer through and add the bottle cap wheels (we painted them black) on each end.
Trim the ends of the bamboo skewer to size with sharp kitchen scissors or a pair of secateurs. Wind shoelaces around the toilet roll pieces to make hoses. Glue the egg carton together to look like a truck. Glue on the bumper, bottle cap headlights and sirens.
Place the toilet roll hoses and ladders in the back of the truck without gluing them in so that they can be used in play. Your fire truck is done!

This one’s off to fight some big, bad bushfires.

How you can make a difference to the bushfire crisis:

I’ve partnered together with Your Kid’s OT and Teach Me Mommy to create this fun bushfire appeal printable activity pack for kids.
The pack costs just $5 and every cent from every pack sold will be donated to the Red Cross bushfire appeal. 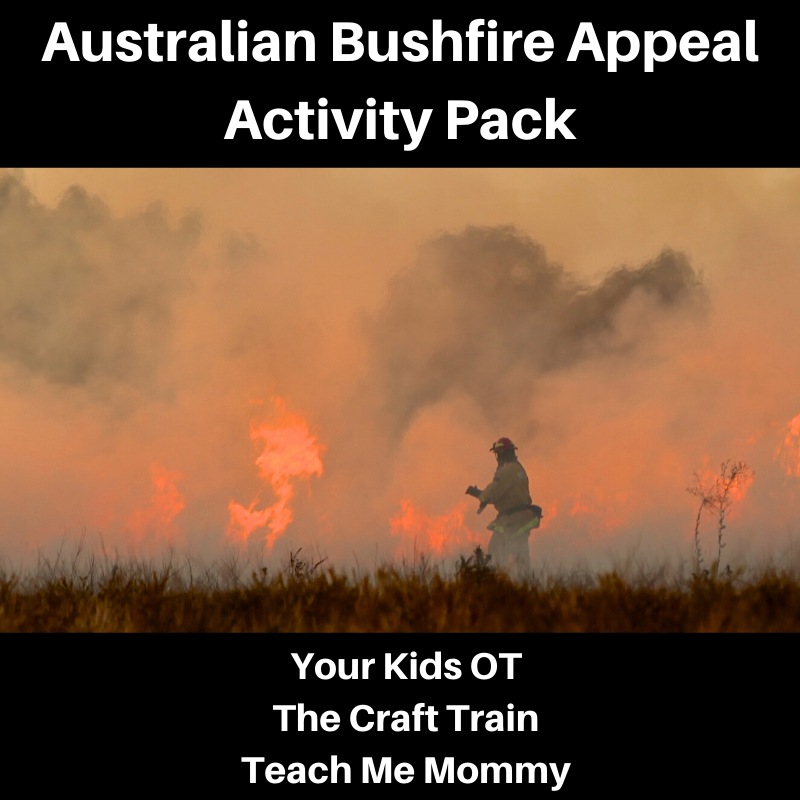 Included in the pack are some Australia-themed printable activities for kids by Your Kids OT, our popular paper plate possum printable craft and some printable Australia Quiz cards by Teach Me Mommy.

Get your copy here

Or make a direct donation to any of these organisations:

Salvation Army disaster appeal
When the fires affected to our community the Salvation army were particularly helpful, providing a catering trucks in the streets for days to supply free hot meals to those whose homes were still standing but who had no electricity to cook or refrigerate food.

WIRES bushfire emergency Fund
WIRES are a group of volunteers who help with wildlife rescue and rehabilitation. Our native animals have been absolutely hammered this bushfire season with an estimated half a billion killed, many more injured and a massive loss of habitat and food sources which are sure to cause further problems down the track for those poor animals who survived the fires.