You are here: Home / Crafts and Activities / Learning and science / Raising tadpoles: Creating an observation tank

Have you ever thought about raising tadpoles? It’s easy! In this blog post we’re sharing how we set up our tadpole to frog tank so the girls could see the incredible metamorphosis first hand at home.

This is a fun and engaging way for kids to learn about the lifecycle of a frog and is a fabulous addition to a unit on lifecycles or mini beasts. 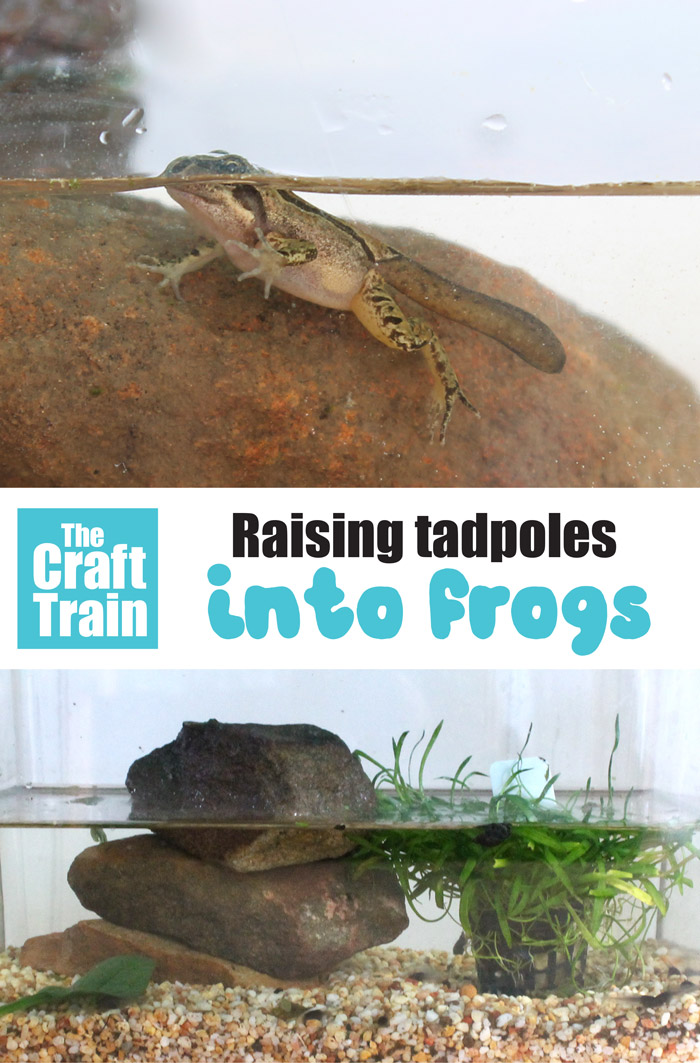 Everybody knows that tadpoles hatch from tiny eggs and then gradually change into jumping amphibians with lungs and four legs But, knowing this and actually seeing it happen are two completely different things. As our macro photos will testify the changes and different stages they go through are completely fascinating to watch – and not just for kids!

It’s possible to set this activity up for next to no cost. I know this because when I was about the same age as my own kids (albeit with a little more freedom) my sister and I used to walk down a bush track near our house, ice cream containers in hand, and scoop little tadpoles from the creek to keep as “pets”.

We filled our containers half-full with creek water and added a large rock for the ones which made it all the way to becoming frogs. I clearly remember how excited we got to see them growing legs, and if you had a little froglet in your container it was the most exciting thing ever!

I wanted my own girls to experience the magic of watching this transformation happen with their own eyes, but unfortunately I can’t bring myself to allow them traipse off into the bush on their own to catch tadpoles. Luckily I don’t need to though because we have a small pond in our back yard that the local frogs love to visit to lay their eggs in.

We hear the frogs more than see them because they are very clever at camouflage and hiding, but we have been lucky to spot them a few times.

If you’ve never seen frog eggs they look a lot like caviar and float like bubbles on top of the water. Every so often we find a batch of them floating on the surface of our pond, but at the time of this project there were none so we caught a few baby tadpoles instead. As I have already explained, you don’t actually need to spend any money to do this project if you don’t want to and the kids will delight in it just as much. However, we thought that observing the changes that happen would be easier in a proper tank which is why this time around, instead of using an ice cream container, I invested in a few items from the local pet shop.

For our tadpole tank we used:

Our experience of raising tadpoles into frogs Once we had the tank set up and ready to go the girls caught some tadpoles by scooping them up in plastic containers. They were so little at first, they must have been not long hatched out of their eggs. 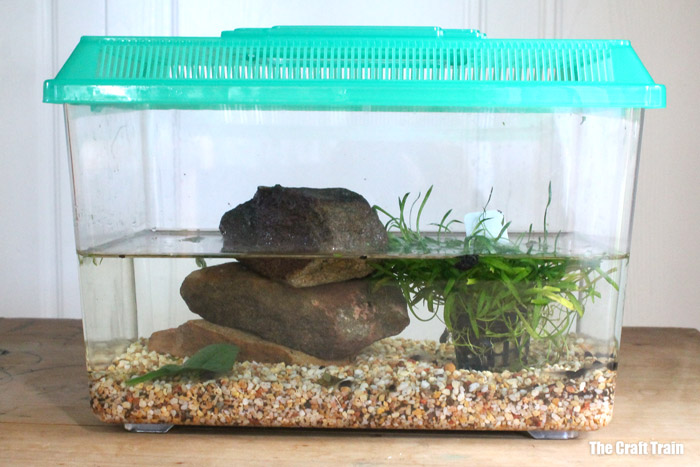 As you can see we half-filled the tank and left some rocks and plant growth poking up from the top of the water. Once the tadpoles turn into froglets this is essential for their survival, but as young tadpoles they only need water and somewhere to hide. The large rocks we added came from the garden. Feeding and cleaning the frog tank

Tadpoles are herbivores, so while they were small we fed them baby spinach leaves which had been rinsed and then microwaved on high for 20 seconds. Three leaves were enough to last a few days, and once they had all been eaten we added more. When they grew bigger they ate more and needed more frequent feeding. 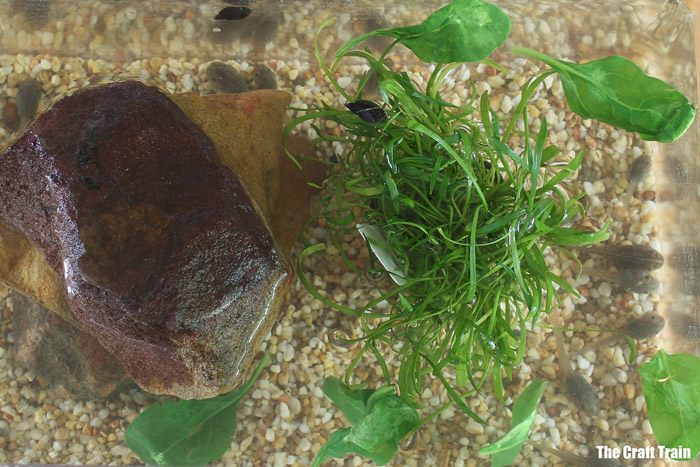 When tadpoles become froglets they turn into carnivores, so they begin to rely on insects as their main source of food. Once our babies started looking more like frogs and less like tadpoles I began to add a scoop of living mosquito larvae from the surface of our pond into their tank as well as the baby spinach leaves.

I’m not a hundred percent sure if they ate the larvae or not because it took a long time to disappear. Still, it appeared to get eaten after a week or so of floating on the surface – either that or they turned into mozzies and flew off into our house!

At first the tank stayed clean for a long time and only needed scrubbing out every few weeks, but as the tadpoles grew bigger it got dirty quicker and this became a weekly task. 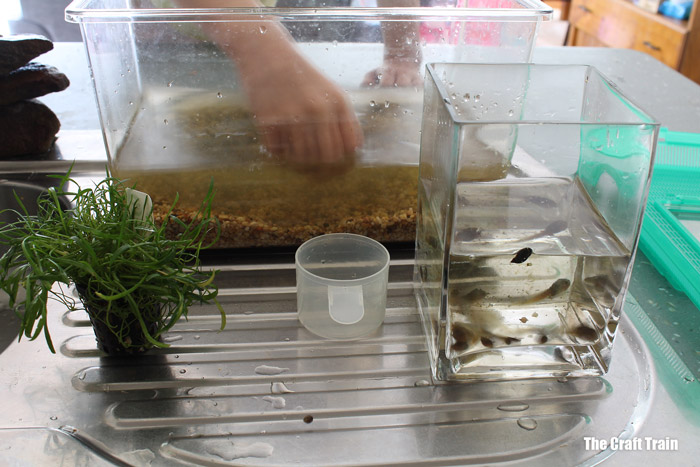 In order to clean the tank the girls helped me catch the tadpoles and place them in a container filled with a scoop of their tank water before completely emptying and scrubbing the dirty tank out. We added fresh tap water and more water conditioner before putting the tadpoles back into their home again.

Observing the tadpole to frog metamorphosis

Here is a tadpole which has grown back legs. Can you see his little arm forming beneath his skin? 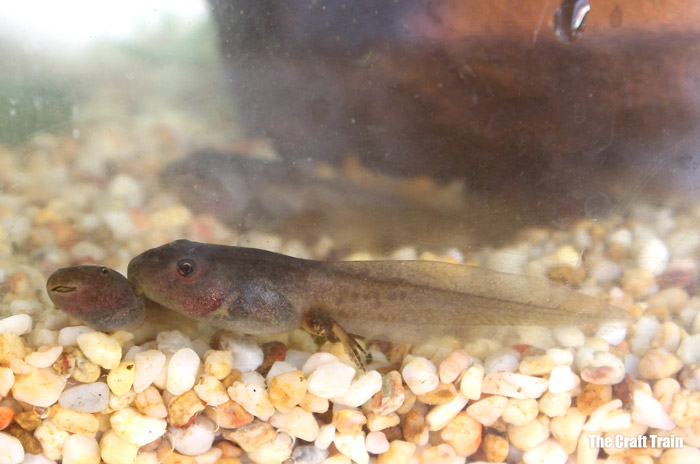 Their skin was quite translucent which I had never realised before, so when we could see their tummies we could observe their intestines too! Notice how cleverly the tadpole camouflages himself to the pink sandstone rock in the image below. 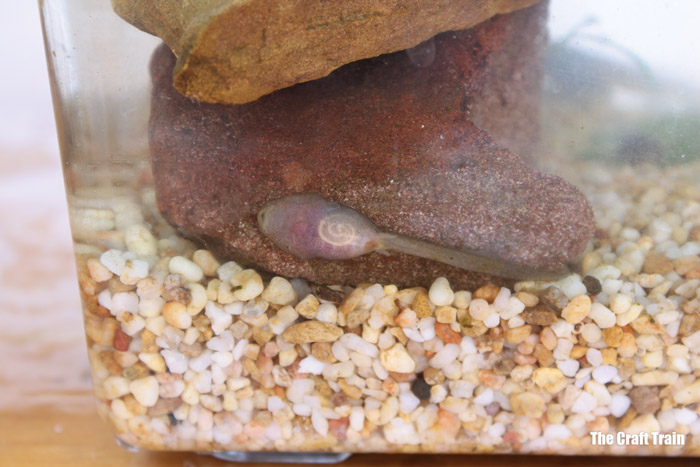 It was truly interesting to observe and photograph the metamorphosis of these creatures.

Some of these photographs have been taken using my Canon DSLR and some are iphone snaps using an olloclip to get up close (a clip on macro lens, which is fun to experiment with). 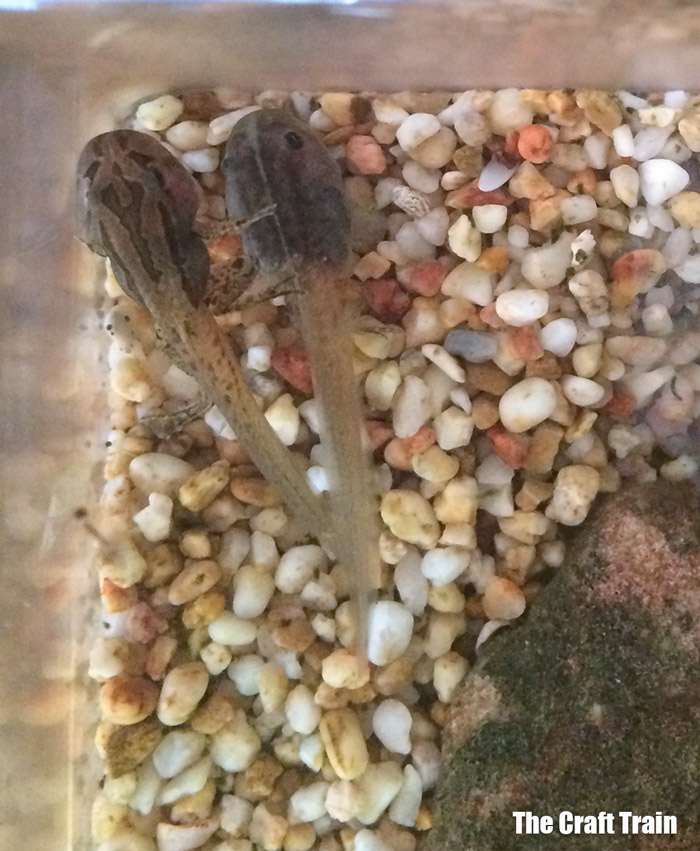 Our tadpoles were all different sizes when we caught them so they were at different stages of development throughout the time that we were observing them. In total we had them in our house for around three months. 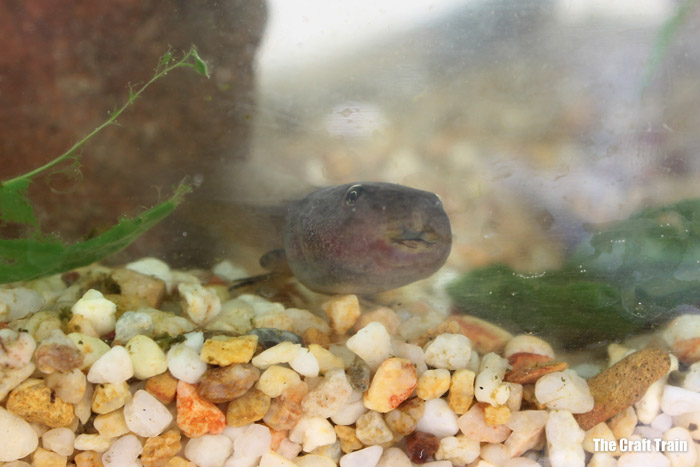 Once our tadpoles lost their tail completely we released them back into our pond. This was something the girls really loved doing! 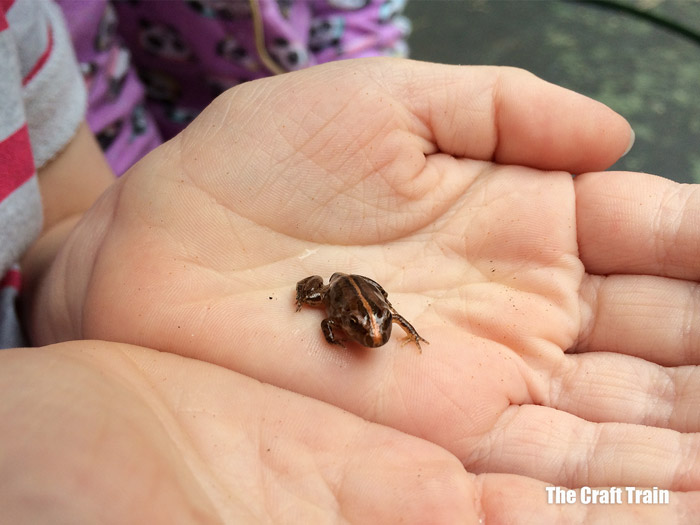 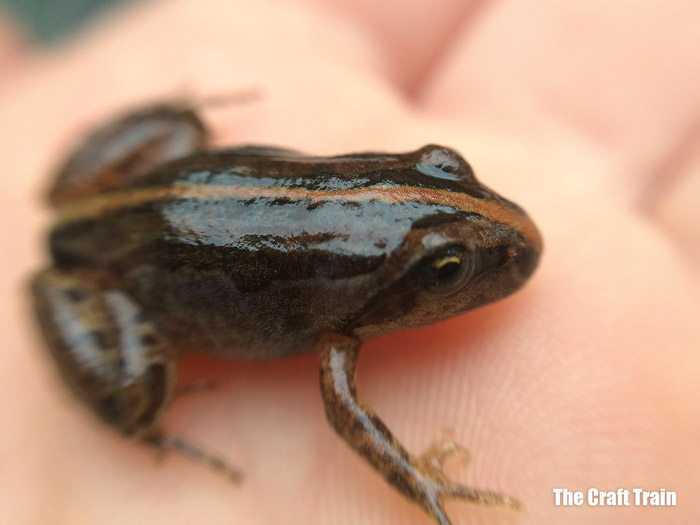 Seriously, how cute are they!

Just in case you’re wondering, the frogs that we have been observing are striped marsh frogs which are common along the eastern coast of Australia and often found in suburban areas.

I’m not an animal expert at all so any questions I had whilst raising the tadpoles I directed them straight to my blogging buddy Penny from Mother Natured. She has also done this activity with her own kids and given away some of her valuable tips and knowledge here.

Have you kept tadpoles for observation before? Trust me, they’re more interesting to watch than TV – and I think even the kids will agree with that!

Rinse a few baby spinach leaves in tap water, then microwave on high for 20 seconds. Allow to cool before feeding them to your tadpoles. Once the spinach leaves have been eaten, add more. Initially this can take days, but as the tadpoles grow they eat more.

Frogs are carnivores and eat insects not leaves. You can catch live insect larvae by scooping it up from the surface of a pond or feed them flakes of fish food