To celebrate Australia Day on January 26th I’ve teamed up with some awesome Aussie bloggers to bring you this Australia Day For Kids series. We’ll be posting lots of fun Aussie-themed ideas you can do or make with your kids leading up to the big day. See the end of this post for a full list of dates and participating blogs.

To kick off the series I thought I’d showcase one of our beautiful Aussie birds by making some Cockatoo pencil tins. Sulphur crested cockatoos (white with a yellow crest) are very common where we live and you often see flocks of them at dusk. While researching this post I found out they are not found solely in Australia but also in New Guinea and other near by islands. They are well known for their cuteness and ability to “talk” when kept in captivity but also for their loud squawk and fondness of fruit. We have several trees that grow small plums in our front garden but we’re lucky to get any at all thanks to these cheeky creatures and their small parrot relations (king parrots, rosellas and rainbow lorikeets plus the occasional possum at night). We don’t mind though, it’s always nice to sit out on the verandah and watch them feasting. These tins are easy to make and are a cute addition to any kids desk. I made one each for my girls. 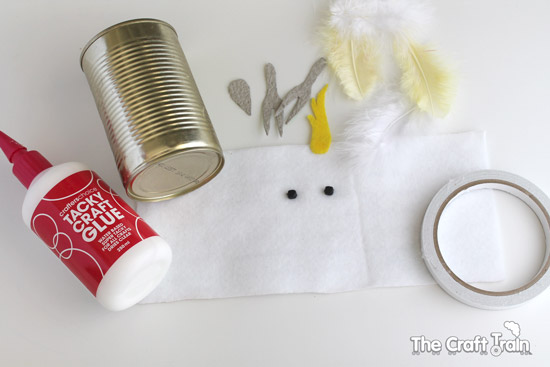 • An empty tin can washed and dried with the label removed
• A white piece of felt cut to the right size to wrap around the tin with a bit of overlap, plus a small scrap of yellow felt to stick on for the crest, cut to shape like in the picture above
• Double sided tape
• Tacky craft glue
• Black beads for eyes, or use googly eyes if you prefer
• Needle and thread (if you are going with beads)
• Cardboard beak and feet to stick on in grey, I’ve cut mine out from the top lid of an egg carton

First sew the beads on to the front centre of the felt approximately a third of the way down from the top. In the picture above showing the materials the beads are already sewn on. 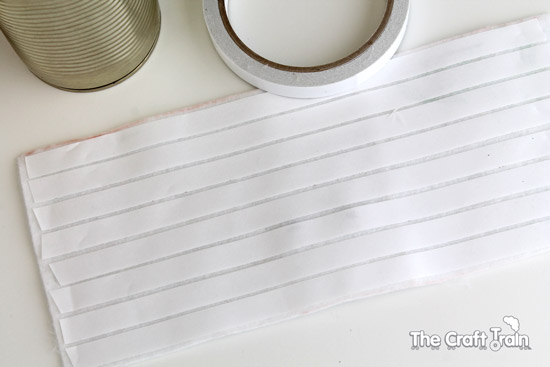 Use double sided tape like I’ve done here all across the back of the felt to stick it on to the can. I found sticking it on with glue didn’t work for me, it was hard to stick down due to the curve of the can and also once dry the glue discoloured a bit, leaving a rust coloured stain that you could see through the white felt. Double sided tape is an instant stick, no mess, no fuss and works great with the felt. 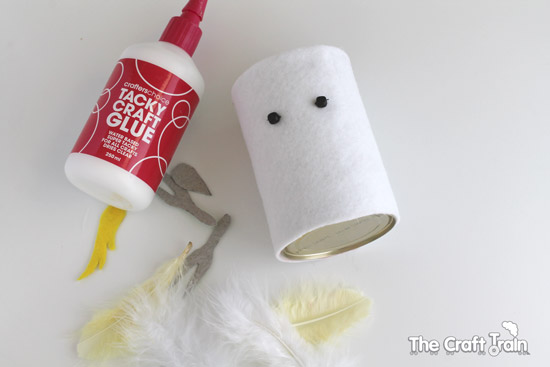 Stick the bits and pieces on with tacky craft glue to complete your cockatoo pencil tin. The feet need to be stuck on last leaving the tin upside sown with the crest hanging over the edge of a table or bench so the feet can dry. 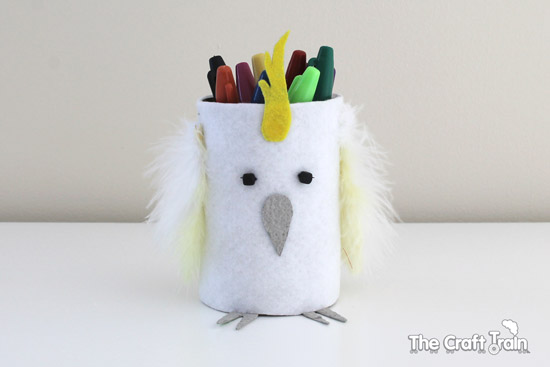 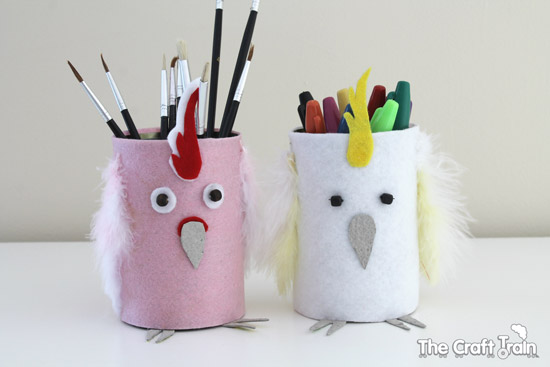 I also made a pink cockatoo so he has a little friend. I’ve never been lucky enough to see the pink ones in the wild because you don’t get them around these parts, but from pictures they are just gorgeous and look like a pink version of the sulphur crested local variety.